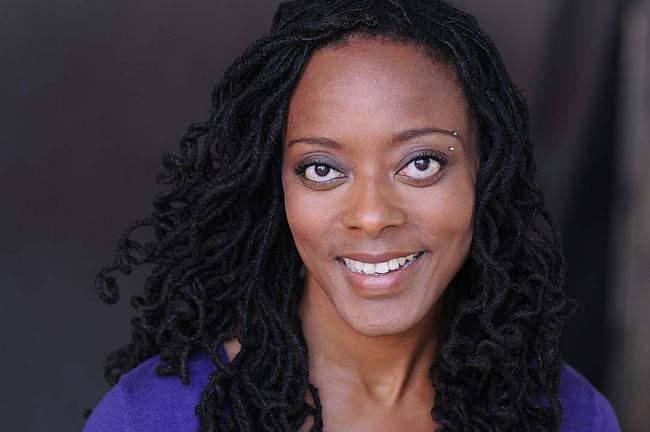 I’m a NYC native, extremely well-educated and classically-trained professional artist-educator, including, but not limited to the following subheadings: actor, dancer, writer, film critic, model, designer, stylist, artisan and freelancer with passion in spades. I’ve got a comedic streak and steely personal integrity, most thoroughly tested in context of current capacities as a housing-rights activist and community advocate. I served on the SFCLT board of directors, and spearheaded the purple house project. 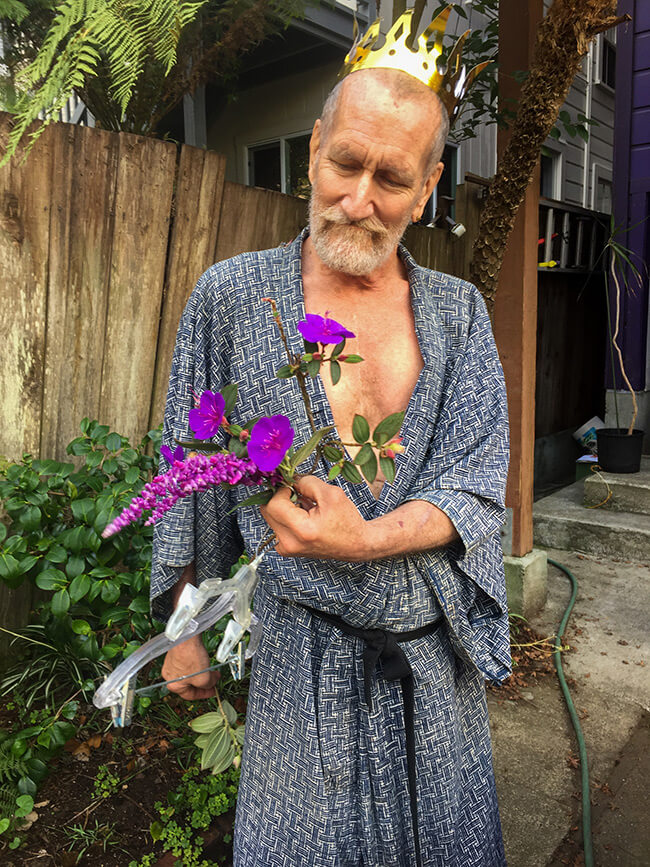 Conway Anderson is the elder statesman and anchor of the Purple House. The longest-staying resident, Conway was part of the house’s previous incarnation known as The Morehouse, an alternative collective that promoted self-study and exploration.

A native of Pennsylvania Dutch country, Conway was the son of a rural preacher and grew up in a tight-knit family with a matriarch who taught her children how to grow, harvest and preserve their own fruits.

After studying at Penn State University, Conway headed out west to seek the California dream of living outside the box. During his participation in the Morehouse, Conway taught calligraphy and life skills and traveled to the collective’s outpost in Hawaii. He moved to what is now The Purple House in the late 1980s and has become a guardian of historical wisdom for the cooperative.

Conway was formerly a member of the San Francisco Gay Men’s Choir and was among the vanguard of gay activists in the City who formed the HIV and AIDS rights organization, ACT UP.

A calligrapher, self-taught pianist and baker, Conway uses his gardening skills to tend to the outdoor area and creates floral arrangements for display in the co-op. He is the key member of the co-op to welcome all visitors. 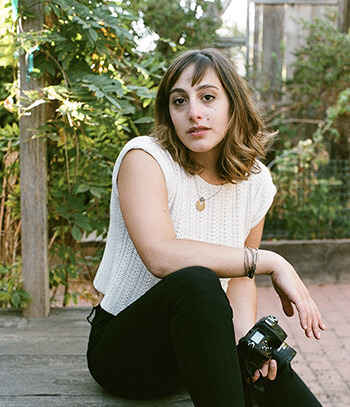 Elsa was raised in a cross-cultural home in France and is bilingual in Spanish and French in addition to speaking English. After completing a Law Degree in Europe, she immigrated to San Francisco in 2012. While practicing law at a Bay Area firm, Elsa was awed by the City’s vibrant music scene.

She was soon immersed in a community of diverse musicians and discovered her passion by turning her lens on documenting live performances and backstage moments revolving around the musicians in her circle. Elsa then expanded her photographic vision to street photography, abstract imagery and the paradoxical moments of life in San Francisco.

“San Francisco shaped me into who I am today,” says Elsa.

“Living at the Purple House allows me to pursue my artistic dreams in a city that forever inspires me.”
http://www.elsatanoukhi.com/
https://www.noapologyfilms.com/ 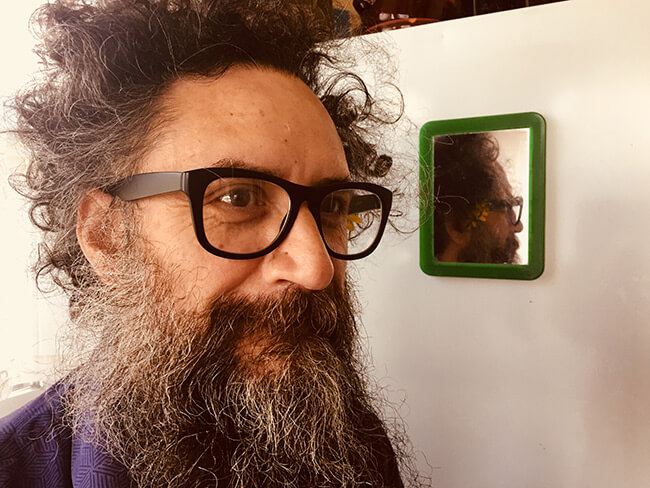 A native of Buenos Aires, Cristian Desmellguador was born in Argentina in 1972 and “reborn in San Francisco in 2009”. Following violent harassment from security forces and right wing groups who targeted the LGBTQ cultural center he managed, Cristian was granted asylum in the United States.

Cristian has been active in the struggle to end all forms of discrimination against LGBTQ communities. Diversity, inclusion and peaceful co-existence are essential guide posts for his life’s work.

Cristian’s passion spins on the turntable of music. As an Artist and Repertoire (A&E) professional, he seeks to encourage collaboration and increase the public profiles of musicians who share a vision for independent music that defies mainstream establishment constraints.

His original label, Calar Music, offers a creative outlet to publish solo and group performing artists and has produced dozens of albums for performing artists including Annie Girl and the Flight, Dave Mihaly and the Shimmering Leaves and DJ Female Convict Scorpion (Josh Pollock).

Cristian stands strong on the belief that access to housing, healthcare, education and nourishment are fundamental human rights that should never be negotiated. “We must do whatever we can to stand up and fights for those rights not only for ourselves, but everyone in our global community,” he says.

Cristian served on the board of Directors of the San Francisco Community Land Trust where he expanded his knowledge of the ongoing struggle for affordable housing in the City.

He is a grateful member of The Purple House and often shares his culinary magic to nourish the artists who shelter there.

I’ve been living in San Francisco since 1994, with a couple of years back in NYC. I’ve been teaching high school English, film and audio production, and cinema studies in Bay Area public high schools since 1995. Currently I teach cinema studies to incarcerated youth at Juvenile Hall in SF. I spent a year on the SFCLT board and am currently the Secretary of Communications for the Purple House. I’m also a filmmaker and musician, but don’t tell anyone. 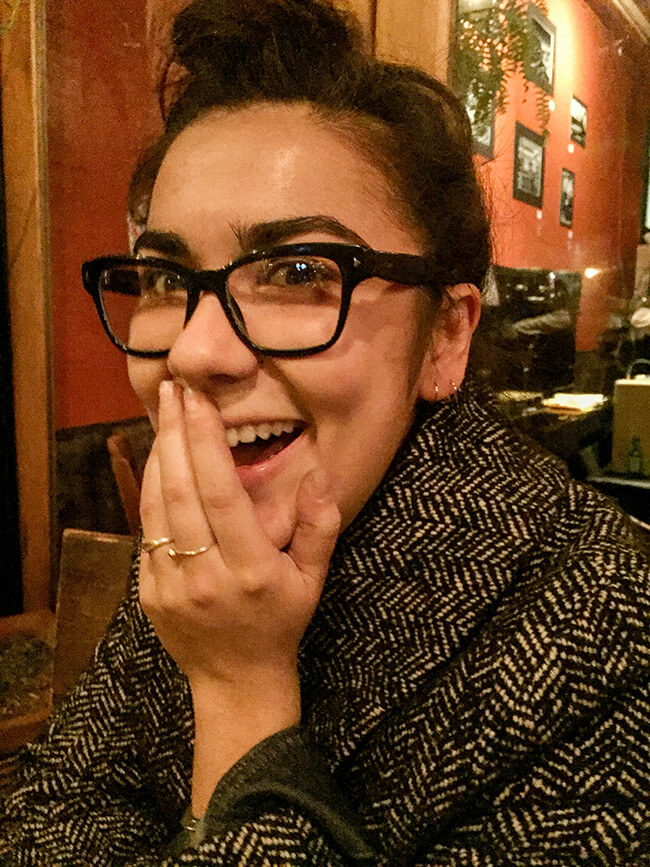 A more recent member of the Purple House, I grew up in Sacramento and moved to San Francisco in 2009 to study fine art/illustration in the city. I’ve spent the last three years working full time as an installation/display artist for a retailer on busy Market Street in the heart of Union Square. Because the retail industry can tend to be wasteful and constantly changing I focus much of my display work on using recycled or common materials in thoughtful ways. In the past year I have begun the process of learning and working in custom sewing, tailoring and upholstery. I sew from a studio located in the back of a motorcycle and car restoration shop which has been operating in the Mission district for almost 20 years. My home affords me the ability to live and grow as an artist and craftsman in San Francisco. 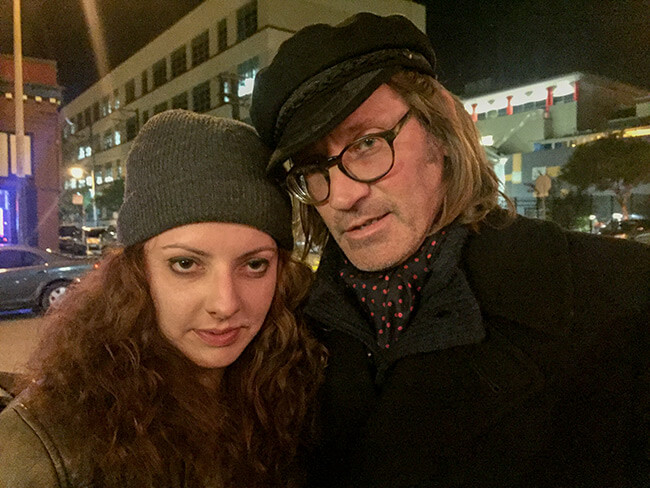 I have lived in the Purple House for almost six years now. This house has afforded me many opportunities, one of which is furthering my studies in traditional Chinese medicine —one of the main reasons I moved from Australia to San Francisco. This house isn’t just about affordable rent. Purple House fosters community and support making it the closest resemblance to a family unit that I have here. 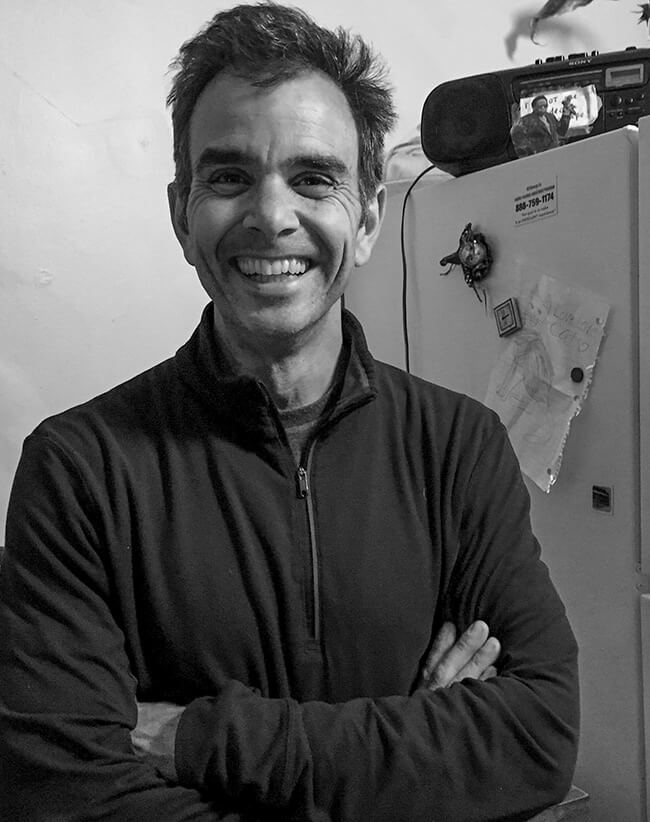 I grew up in the Boston area, and moved to the sunny/foggy climate of San Francisco 18 years ago. I came out here to go to graduate school for photography. I found myself working as a bike messenger and was involved in many labor struggles relating to the industry. I presently have a dark room where I teach classes and print traditional black and white photos. I have stayed true to my art, though the tide of photography has gone digital.

For the past decade, I’ve been part of a cultural preservation project documenting the rich heritage of the Laotian refugee community in northern California through stories and photos.

I hand-built a photo studio in a garage in the Mission district as a creative workspace and exhibition venue for my work with plans to open it for emerging photographers. The studio launched in late 2017 with the exhibition “Every Day Gets Brighter”, street photographs of the Mission District, in black and white, taken between the winter solstice and spring equinox last year accompanied by a self published photo book with original soundtrack.

I shoot social justice issues and protests in the City and am a contributing photographer to Mission Local, a community newspaper.

Living at the purple house with reasonable rent make it so that I can stay in this city and continue to be an artist in my community.
http://www.fotosanchioni.com/ 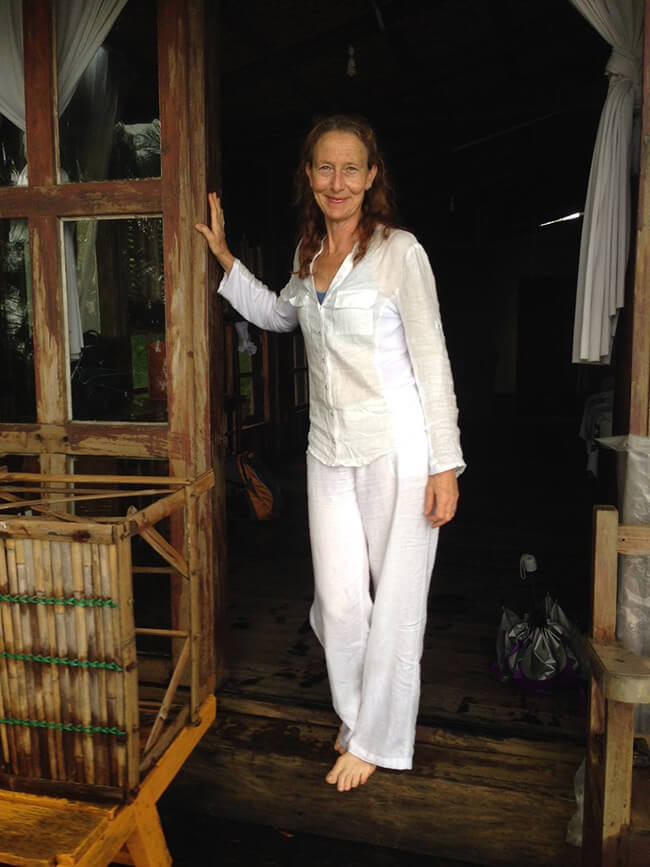 Filmmaker and photographer Jeanne Hallacy lived in Southeast for decades producing stories about human rights and social justice issues. Her award-winning documentary films are used as agents for change. Her film titles Sittwe, This Kind of Love, Father and Son Artists, Into the Current: Burma’s Political Prisoners, Mercy (meddah), No Women, No Peace and Burma Diary are distributed by Kanopy and Documentary Educational Resources. https://jeannehallacy.com/

She served as the Director of Programs at the Foreign Correspondents’ Club of Thailand, the ASEAN region’s largest press club, for 15 years and was actively engaged in Press Freedom. A former television journalist, Hallacy has worked with non-governmental organizations and United Nations agencies producing content on socio- political issues. She worked as the Media Coordinator for the UNAIDS networking with civil society groups on preventing HIV.

The Purple House has given her the first home base in the US for decades and allows her to pursue her international human rights advocacy.